Teaching My Kids a Lesson I’ll Never Forget – Part One

I have a lot of fears. Bees, heights, the ocean, riding in a Porsche, etc. all of which tend to make me act irrationally. I realize everyone has fears but not everyone has the tendency to run in a zig-zag like pattern (with arms flailing no less) at the sight of a bee (or perhaps a large fly) or break out in a cold sweat while typing about their fear of heights because the mental picture of standing on something higher than two feet off the ground is more that they can take. It’s not pretty. After my first son was born I decided that I needed to get over these fears, or at the very least bury them deep inside my psyche so that they only appeared when my children were not around to witness my behavior. In this post, the first of a two-part series, I will share with you my success in overcoming one of these fears: bees… 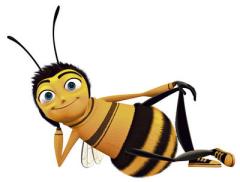 Bees may seem sweet and innocent, what with their yellow and black stripes and matching sneakers, but they aren’t. They’re jerks.

I had been stung twice by bees by the time my first son was born; once as a young boy , the second time as a teenager, and I didn’t enjoy it either time. The first sting occurred when I found myself caught in the middle of a battle between a dog and a bee. The dog, being a rational creature,  wasn’t fond of the bee buzzing around and decided that the best course of action would be to try to eat it. The bee, being a rational creature, decided it didn’t want to be eaten and made a beeline for the best hiding spot it could find: inside my shirt; thus my fondness for the flailing-armed run was born. As I ran for my life the bee realized, too late, that my shirt wasn’t, in fact, the best hiding spot and determined that its best course of action was to go out in a blaze of glory by stinging me in the arm and buzzing around in my shirt until its rotten-to-the-core heart beat no more. It was traumatic, but not as traumatic as the second sting would prove to be. 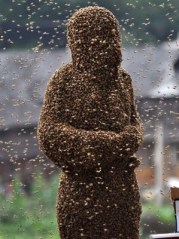 The second sting occurred in my early teens as I was helping a friend of our family move a wood pile. As we made our way to the bottom of the pile we had the good fortune to discover a bee hive/condo/cult and the bees were none too happy about it. The friend I was helping was wise enough to run like the wind, I however decided to follow the stand-still-until-you-are-completely-traumatized-and-then-get-stung method of escaping. I can still feel the tiny pitter-patting of sneaker-encased bee feet walking on the top of my head. I can still hear the mocking laughter that was the buzz of their tiny little wings as they explored my ears for a new home like so many Magellans. I can still feel the pain ripping through my body (or at least a stinging sensation in my shoulder) as one bee, who had apparently grow tired of tormenting me, decided that it would teach me a lesson I would never forget: bees are jerks. Because of the trauma I received from these violent and cruel creatures, my fear of bees was tremendous but, I believed, not unconquerable.

In order to prevent my children from seeing me turn into a deranged Carl Lewis every time I saw a bee (or anything else that made a buzzing sound) I immersed myself in bee culture. I read books about bees. I meditated on their integral place in the universe. I watched b-movies until I discovered they weren’t actually about bees. As I came to understand bees better my fear of them subsided until one day, when I found myself outside with my oldest son (who was two and a half at the time), I watched, unflinchingly, as a bee buzzed around us. I could see that my son was nervous so, as I stood there calmly, I began explaining to him that bees are wonderful creatures and that they wouldn’t hurt us as long as we left them alone. Even after all of my studying and contemplation I knew, of course, that this was a lie. Bees are jerks. They like to buzz around and sting people whether said people are standing still, playing dead or running and flailing their arms; that’s just what they do. Despite the fact that I felt bad about lying to my son it did the trick. For a year after that my son wouldn’t run away shrieking when a bee flew by us; he just stood there stoically until it went away. I was proud of this success. Then the proverbial “other shoe” dropped.

Actually it was my son’s bare foot that dropped. Next to a bee. Being the miraculous creature that it was, it stung my son in the heel. Continuing with the charade, I told my son, as I was pulling the stinger out of his heel, that the bee was just frightened and stung him out of fear. It was my second lie about these beasts but I knew it was for my son’s own good. Even after being stung by a bee, my son continued to show no signs of fear around bees…until three months later when I was stung by a bee for the third time (after audaciously placing my arm on a picnic table). Despite my son’s best attempts to explain to me that the bee was just scared and not being mean, I knew the charade was over. As he held my hand and told me I would be okay I told him, between sobs, the truth about bees.

Even though I may not have conquered my fear of bees I feel a little bit of pride knowing that, because of me, my son now runs (with flailing arms) from bees, gnats, lady bugs, etc just like I do.