Conquering My Fear of Heights One Heart Attack at a Time

In previous posts I’ve written about conquering some of my fears (i.e. water, bees, porches) but a few days ago I was forced to face my greatest fear: going to a Justin Bieber concert. Thankfully that’s not true but unfortunately I did something almost as terrifying: going to a place called Tree-to-Tree Adventure Park. It sounds like a nice enough place doesn’t it?

Perhaps it’s due to my fear of heights or my odd desire not to die anytime soon, but I would suggest that this company change their name to: Tree-to-Tree You’re Going to Die of a Heart Attack While Going Through Horribly Conceived Obstacles Courses in Our Horrid Little Forest That Was Grown Specifically for Our Evil Purposes to Make People Spend Money to Have Heart Attacks and/or Fall From Said Obstacles Courses and Die a Miserable Death That Way. Or something along those lines.

I’m exaggerating of course, but it was terrifying for me for a number reasons which I will now relay to you in very little detail lest the panic attacks resume….

Possibly the point that my heart gave out for good. (photo credit: the evil place that destoryed that my heart).

The day started out nice enough as I drove to work to pick up the few co-workers that hadn’t backed out from this adventure. In hindsight, this should have been a telling sign for me as, what was initially supposed to be a group of eight dwindled, at the last-minute, to four. Some had legit excuses others were vague about their reasons for going – I know understand what those reason were. At any rate, the four of us made the drive to Tree-to-Tree-to-Heart-Attack, got strapped into our harnesses and put on our helmets, went through orientation and then, in my case at least, wet themselves.

After relieving myself, I awkwardly followed the rest of the group to the first course. The park is made up of six courses all of which are color-coded to indicate the level of difficulty of a given course (green = minor panic attack, black = you will most likely die or, at the very least, be maimed in some way). We were instructed (I think – the various alarm bells and panicked voices in my head prevented me from really hearing anything that was being said to us), to start off on one of the green courses which we did. As a reminder, the green courses were “easy”, however, I had my first heart attack on this course, and it just got worse from there.

I would go into detail on each course but my mind has created a wall around most of the details in order to protect my still fragile psyche. What I can tell you is that these obstacle courses brought out a sense of panic and horror that I had never experienced before. As I walked along a tightrope, wobbly wooden steps and various ropes thousands of feet in the air I remember thinking to myself that maybe a Justin Bieber concert wouldn’t be so bad. In fact, at one point, as I was standing on a wooden step attached to a couple of ropes that was rocking back and forth fast enough to make me not notice the trembling in my legs (no easy feat), I recall thinking that going to a Justin Bieber concert that lasted for all eternity and had an opening act of Celine Dion would have been preferable to what, I was sure, would be my impending doom on this tiny wooden step high up in the trees with no hospitals within a 5,876 mile radius. I stayed on this rocking step for an unknown amount of time, thinking these thoughts, while trying to determine how to get to an equally horrifying rope bridge and God knows what else after that.

It was then that something happened.

I heard a voice. A strange, yet, oddly familiar voice.

The voice said, “Oh, this is the big one! I’m coming to join you Elizabeth!” 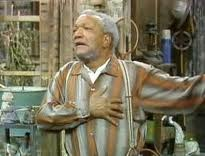 Is that you Redd?

It’s been several days now since this happened and I still have no idea who Elizabeth is or how Redd Foxx made his way into my head. Whatever the reason, Mr. Foxx’s voice propelled me ahead and, as I zip-lined my way out of the trees and into the dirt, I gave a silent thanks to Mr. Foxx (and Elizabeth – whoever she was).

Safe on the ground, I felt relief (in more ways than one) for having survived a course that a bunch of fifth graders were now completing with ease and, incomprehensible to me, with smiles on their faces. My group also had smiles on their faces and they continued to talk merrily as we made our way to a Red (a.k.a. very high likelihood that you will not survive) course.

Due to the fact that my therapist has instructed me not to delve into the details of this course lest I risk doing severe, and most likely, permanent damage to my mind thereby finding myself actually liking Justin Bieber and/or Celine Dion, I will not be able to say much about this course other than this: my heart did not go on. To be honest, I’m not even sure I actually have a working heart anymore. If I had to guess I would say that at some point during this adventure/trauma I actually did die of a heart attack and that the good folks who work at Tree-to-Tree, being used to this sort of thing happening, gave me a transplant of some sort – probably tree sap was involved.

At any rate, I made it through five of the six courses with my tree-sap heart beating away and watched in both awe and horror as the rest of my group not only attempted, but conquered, the final, and most difficult course. It was an impressive sight to behold, and was by far my favorite course of the day.

As we made our way back to the lodge, me with tree sap now running through my veins, one co-worker with rope burns on her neck and yet another co-worker with an indescribable amount of skin, and who knows what else, missing from one of her fingers, I found myself thinking, “Oh, this is the big one! I’m coming to see you Elizabeth!”

I just wish I knew who Elizabeth was.