Home › Humor › A Tricky Foe: A Tragedy of Sorts

A Tricky Foe: A Tragedy of Sorts

Recently my son asked me to read him some of the posts I’ve written for this blog. After reading two or three posts he proclaimed that I wasn’t funny and that he could write a funny post better. What follows then is a tale inspired by my oldest son’s idea of how a funny story should be written…

It was a warm sunny day in the fabled Pacificus Northwestius; the sort of day where you would expect to hear the squeals of children playing in their yards, birds chirping merrily and curses being uttered by wives as they mow the lawn while listening to their husbands snore on the hammock. Yet, we heard none of these things. Not because children weren’t outside playing; they might have been. Not because birds weren’t chirping merrily; why wouldn’t they? Not because wives weren’t uttering curses about their husbands while mowing the lawn; they undoubtedly were. The reason was much graver I’m afraid. For, you see, today was the day a battle was to ensue. A battle of good versus evil. A battle of chaos versus order. A battle of a dad versus his son. My son and I were not excited to see this day come but we were expecting it. 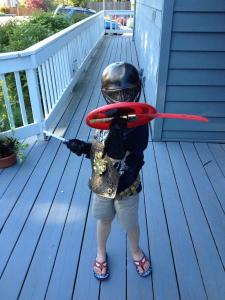 And I thought I stood a chance against this guy!

In the days of yore (mama) it had been preordained by the Bureau of Preordainment that a battle between son and father would ensue in which only one could be victorious. Unfortunately, our official notification from the Bureau was lost in the mail and it wasn’t until a second notice arrived the day before that we were informed of this impending clash. If you are at all familiar with preordained battles then you know that a mere day’s notice is highly unusual and quite inconvenient for the parties involved in said battle as they are then given but little time to prepare. Alas, there was nothing for my son and I to do but play the cards we had been dealt. And so, as the aforementioned day dawned, my son and I met at the battleground (kitchen table) glanced quickly at the weapons at hand (Lego blocks) and shook hands twice: the first shake symbolizing the end of our father/son relationship, the second nothing more than a mere courtesy between adversaries. Then, as a blood-curdling yell emitted from my son’s mouth the battle began!

(A quick aside: Normally my lack of vocabulary and writing skills depress me when I write a post for this blog, however, I look upon these weaknesses as a blessing as I now attempt to describe the horrors that occurred that day…Reader discretion is advised)

My son’s x-wing fighter and destroyer of my will to battle.

After what seemed like a lifetime but was just mere minutes, I felt victory was mine as I gazed upon my creation: a spaceship in the form of a single Lego (a wing!). The moment was fleeting, however, as my five-year old adversary suddenly, and in an act of undisguised aggression, swooped in with his 3-foot long x-wing fighter (with dual laser blasters, triple-flame-sword shooters and a T-Rex no less!), and destroyed my wing/ship along with my will to continue the fight. Tears rolled down my cheeks as I thought of all that had been lost in this battle; a battle that I was to blame for losing despite the heroic efforts of the brave men and women who, without regard to their own safety, manufacture Lego blocks on a daily basis. I cried for all that my wing/ship could have accomplished had its life not been cut short by this merciless enemy. I cried for the injustice of a world (or at least the Bureau of Preordainment) that would allow such a battle to happen. I cried because I was, just then, bit by a spider.

The shock I felt at being bitten by a spider at such a moment of tragedy was so strong I feared I would not recover from it. Through a strength of will I never expected to find within myself I was able to mutter to my son, “Ouch.”

“Haha!”, laughed my son. “I have bested you in this preordained battle father, however, I do apologize for the spider, it was meant to only be used as a back-up plan should you have been on the brink of defeating me. Nevertheless, my preparations and trickery have…”

“Yes Father. Did you truly believe that I, a five year-old boy, would not only volunteer to do the dishes but also be able to complete such a complicated task?”

“I…I…I hate doing the dishes,” is all I could muster.

“Tsk, Tsk. I knew your disdain for dishes would be your downfall and so exploited it to the fullest. It was a risk of course that you may notice the pile of dirty dishes that remained on the counter after I said I was done washing them, however, it was a risk worth taking as your lack of awareness is also well-known by me.”

“Please tell me your younger brother’s cute singing and sayings like – toot nack instead of fruit snack – was not part of this devious plan as well!”

“Oh, father how easily manipulated you are! Of course I utilized my younger brother as a distraction in order to complete my battle preparations and ensure that the spider was properly prepared for any contingency,” my son – my enemy – mockingly explained to me.

“The ABC song…the unprompted completion of unassigned chores…it was…it was all but…a ruse then?”

“But I heard running water. I heard scrubbing about in the sink. If you were not doing the dishes, what then were you doing?”

“Silly father. I was washing the spider of course,” he laughingly replied

“Washing the spider? Whatever for?” I asked with the last bit of animation I could muster.

“Must I spell it all out for you father?”

A weak nod is all I could manage.

“Because dad, if the spider hadn’t been washed he would have gone to a new dimension because of the portal that opened up when the Power Ranger’s zord battled against the moogers, and the only way to stop it was by washing the spider in the sink or use the evolvement of Pikachu to create a gluteus maximus-Draganoid Bakugan to spit fire from his nose and then seal it shut with Spiderman’s webs.”

Before I lost all consciousness I had one last ellipses laden thought: “This…was…one…tricky…foe”