To My Faithful Readers: 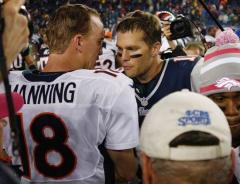 Hey, Tom! Do you want to go to Omaha with me some time?

It is both a privilege and an honor to write, this, my second state of the blog address. In preparation for this post I decided to review some of the great State of the Union addresses given in America over the past week and their equally great rebuttals. What struck me the most while reading these precious documents was that both parties failed to mention any attempt to pass legislation limiting the number of times that Peyton Manning could yell, “Omaha, Omaha!” in any given game. I understand that Omaha is, and always has been, a great city as evidenced by the following exiting fact that I discovered about “The Gateway to Somewhere Else” as Omaha likes to refer to itself when it has husked one-to-many ears of corn (if you know what I mean): Marlon Brando’s mother used to give Henry Fonda acting lessons at the Omaha Community Playhouse, but is it really necessary to hear about it approximately 1,589,623,125 times over the course of one drive in one football game?

Hey, Troy! Do you want to go to Omaha with me sometime?

“I won the Korean BBQ eating contest and all I got was this lousy dictatorship!”

Besides failing to issue a gag-order on Peyton Manning, both parties also failed to praise the difficult diplomat work that Dennis “I-may-not-be-a-real-diplomat-but-I-did-date-Madonna-once-and-that-is-close-enough-for-government-work” Rodman did in North Korea. What made Dennis Rodman’s efforts all the more amazing and, consequently, the governments lack of mentioning his efforts all the more egregious is that he performed this duty despite the fact that he has technically been dead for the last 12 3/4 years. After performing much diligent research on this subject I discovered that Dennis Rodman was infected with a zombie-inducing virus while getting a tattoo of a piercing on an unmentionable part of his body (which, really, could be anywhere when we’re talking about Dennis Rodman’s body) by an undercover zombie agent who, under the direction of the zombie hordes (a.k.a. The Tea Party), planned to use Rodman as a way to infiltrate into the mainstream due to the fact that nobody would notice a change in his appearance. The NSA, having caught wind of this plan, via a copy of a report leaked by Edward Snowden, decided to send Dennis Rodman to North Korea under the guise of a basketball game in hopes that he would eat North Korea’s dear leader, “Lil'” Kim Jong-un’s brains and rid the world of one more loon. The plan backfired however as the zombie refused to touch such a loathsome creature as Kim “You-really-don’t-want-to-meet-my-dogs” Jong-un, leading to the, in hindsight, not-so astounding discovery that even zombies have higher standards than our government.

Dennis Rodman before he became a zombie

Dennis Rodman after he became a zombie

Speaking of standards, the standards I’ve set for this blog in 2014 are high; higher, in fact, than the good citizens of Colorado and Washington combined. I learned a lot about what people liked to read about on this blog (pals, Dan Brown novels and teaching kids lessons) and what they didn’t (pearl jam, haikus – and poems in general, and accounting codes) and I assure you that, much like our government today, I plan on ignoring what people want and instead write about whatever topics the lobbyists decide I should write about. I realize that some of you may take this statement to mean that I don’t care what this blog’s readers like to read about; this is not true. I do care. It’s just that the lobbyists know better about what you like to read than you do yourself. Please don’t forget, however, that this blog is for you, the great people of Whatever-Place-You-Happen-To-Be-At-When- You-Read-my-Blog, and as such I promise to continue to provide blog posts that live up to the standards set by the lobbyists.

“Welcome to the Government, may I help y….hahahahahahah!”

Regardless of what standards are set for me for this blog I also promise to not forget about the humble roots that gave rise to this blog. Coincidently, this blog’s humble roots are not unlike the roots of the author of the Republican’s rebuttal to President Obama’s 2014 State of the Union address,  House Rep. Cathy McMorris Sherman Wilson Harvin Lynch Tate Thomas III Rodgers, who went from a highly productive member of society when working at a McDonald’s drive-thru to a politician. It’s a sad story that we read about all to often here in America. While I neither worked at McDonald’s nor became a politician, it’s possible that I could have. Instead my humble blog writing roots took ground out of an inspired idea of writing a blog that informed it’s readers of the pressing issues of today in a no-nonsense accountant sort-of way and through hard work and dedication I might have accomplished these goals too. Instead the realization that it’s a lot of damn work to try to inform readers about the pressing-issues of today led me to abandon what would have been a true contribution to society and adopt an easier approach to my writing: just make stuff up and hope that nobody notices.

In closing, if you had asked me a year ago where I thought this blog would be today I would have responded with all the youthful enthusiasm of my six-year-old by stating: “Huh?”. Now, however, I’m older and wiser and, if I were asked where I thought this blog would be in the next year I would respond by shouting, “Omaha, Omaha!” several times each Sunday between the months of August and February. After all it works for Peyton Manning and, by all accounts, the government won’t do anything to stop me. 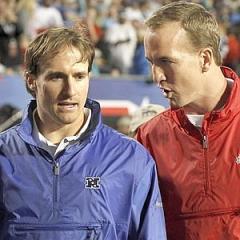 Hey, Drew! Do you want to go to Omaha with me sometime?