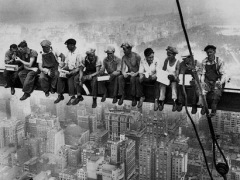 My wife hanging out with her neighborhood gutter cleaning buddies

As I explained in my last post, I have a lot of fears. Some of these, like my fear of bees as an example, I’ve tried to conquer, without much success, since becoming a dad nearly six years ago. I’m still terrified of heights as evidenced by the fact that I tend to cower in a corner sucking my thumb when my wife climbs onto the roof to clean the gutter or hangs out of a windowsill on the second floor in order to clean a spec the size of half a gnat from the outside of the window. Some men may feel that such behavior from their wife is a knock against their manhood, mainly because it is, but I’ve come to terms with it and take pride in the fact that I have offered several times to pay somebody to do these types of chores for her. While I haven’t attempted to conquer my fear of heights I did attempt to conquer another fear a few years back: the ocean.

Three years ago my wife and I decided to take a trip to Hawaii to visit my sister and brother-in-law for a much-needed vacation for just the two of us. As we made our plans and worked on coming up with a list of activities we wanted to partake in while on the Big Island my wife blind sided me with this…

Wife: I want to do the night-time Manta Ray snorkeling.

Wife: They give you a wetsuit to wear plus you’ll have a noodle and a snorkel mask, so you don’t need to swim.

Me: (slightly panicking) I can’t swim.

Wife: It’s impossible to drown with the wetsuit.

Wife: (voice noticeably irritated): Would you rather climb up onto the roof and clean the gutters when we get back?

Me: (meekly, haltingly) I can’t swim…

Knowing I was stuck between a roof and a wet suit, I agreed, after much debate, to join my wife on the night-time Manta Ray snorkeling adventure. This decision wasn’t made because I found it less frightening than climbing up on the roof but because it gave me an opportunity to teach my children a valuable lesson: don’t argue with your wife. Also it was a chance for me to conquer my fear of water.

To clarify, I’m not afraid of water in the sense that I have no problem drinking it, bathing in it and even wading into a river, lake or ocean so long as it goes no higher than my toes. What I am afraid of is being in the middle of a large body of water where I have nothing to apply my ninja-grip on in order to have some sense of solid ground. In order to prepare myself for this night-time dip in the pond I had several anxiety attacks and visualized all of the most horrendous outcomes I could come up with. It didn’t help. Nothing could, save a government ban on night-time Manta Ray snorkeling which, of course, didn’t happen because when, really, does the government ever do something helpful for one of its terrified citizens?

The day of the snorkeling was spent pleasantly driving around looking at the various sights with my sister and brother-in-law acting as our tour guides but I enjoyed none of it. All I could do was watch the clock knowing that a terrifying destiny awaited me. So, as my brother-in-law drove us (much too quickly for my taste – and he wasn’t driving fast at all) to the boat that was to aid me in defeating my fear, I decided to accept my fate and embrace the panic surging through me. 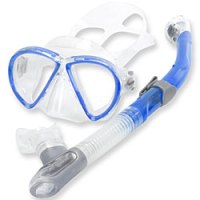 To my surprise I was having a great time as I put on the wetsuit, threw on the flippers and picked a snorkel. The water was choppy as the boat headed out to the dive spot where, apparently, all of the cool Manta Rays hang out at night where they exchange sordid stories about dolphins that they went out with once and have contests to see who can drink the most polluted water without passing out. As the boat stopped I was still feeling fine until I, quite suddenly, found myself standing on the edge of the boat being told to jump in and swim over to the pontoon where the aforementioned Manta Ray would appear. As the boat personnel patiently waited for me to jump I did the only thing I could in that situation; I had an anxiety attack that Woody Allen would have been proud of. Whether I actually jumped into the water or fell in due to trembling off the edge I don’t know. What I do know is that I was immediately hit with a tsunami-sized wave that left me gasping and struggling to get back to the boat. With my mind clouded from the anxiety and my heart beating harder than any heart should ever beat I struggled towards the light ahead, realizing too late that I had made it to the pontoon rather than the boat.

Wife: Just put it on your face!

With the snorkel secured I joined everyone else in plunging my face into the water to wait for the Manta Ray to show up. What I found with my face in the water, however, wasn’t a Manta Ray but instead a snorkel mask that allowed as much water to seep into it as possible in order to provide me with the sensation of sticking my face in the water without a mask. I discussed this calmly with one of the boat personnel who happened to be near by…

Me: (shrieking) My mask is leaking!

Boat Personnel: It’s because you have a beard. You need to get a special mask from the boat.

I somehow made it back to the boat switched masks and made it back to the pontoon just in time to stick my face into the water and not only see the giant beast’s mouth gaping up at me but to also feel the all-too familiar sensation of water pouring into my mask. It was a beautiful sight to see but I knew if I were to survive the night I had to get back to the boat so that I could properly hyperventilate without the distraction of possibly drowning getting in the way.

Manta Ray laughing at my sieve of a snorkel mask

Stripped of my wet-suit, my dignity and my desire to teach my children anymore lessons I sat down next to my wife, who, due to the choppy water, had generously given her supper to the various hungry ocean creatures, and we rode back in near silence until…