Home › Beer › T’was the Night of the Triple Bock

T’was the Night of the Triple Bock

Bottle of Samuel Adams Triple Bock Beer Chunks (please consult your therapist before consuming this beverage as it has been known to cause psychological damage to those who drink it. Plus it just doesn’t taste very good at all!)

Staying in the same vein as my last post, The Meaning of the Word Pals, the following poem was written to memorialize the drinking of a 14-year old Triple Bock with my wife and four other pals (one of whom was lucky enough to be pregnant and therefore couldn’t participate in consuming this brew). The Triple Bock is a beer produced by the Samuel Adams Brewing Company and is brewed in the ale style defined as “Absolutely Disgusting”. Additionally, the Triple Bock clocks in at a whopping 18% alcohol. This may seem like an extreme amount of alcohol for a beer but when you consider the fact that most people will never get past the first sip of this brew it’s really no higher than a Bud Light. So, without further ado, I present to you…

T’was the Night of the Triple Bock*

Menus were perused with anticipation and delight

The patrons were all talking, laughing and sipping

And at our table we gave the waitress our order

Then began conversing about this, that and the other

And said cheers as we clinked each other’s cups

With a beer in hand our merriment grew

The neon and street lamps turned night into day

Preventing us all from trying to run away

When, what to our wondering eyes should appear,

As we stared at the mere 8.45 oz bottle with the black foiled top

More rapid than eagles the sweat poured down our faces

At the thought of drinking this dreadful libation

V said with glee as he poured it

As thick as motor-oil that beer did pour

Instantly staining the glass as V poured in more

Then a sight was beheld that is sickening to this day

Beer chunks floating about in a most appalling way

Then, in a twinkling, we remembered a boast

By the look of the Bock’s chunky gyrations

As she took up the glass her hand did tremble

While she tried to determine what the smell did resemble

A hint of soy sauce, a dash of molasses

Would this be the first drink of an historical two we all began to think?

Alas, it was not to be and her face said it all

Her lips began to tremble and her complexion was a pall

At that moment we all knew what to do

We had to help M dispose of this brew

In a forced look of confidence Nathan took his first sip

And immediately felt his stomach start doing a flip

Next V took up the mug of slop

T took her turn to be polite

Then Travis did something no human should ever do

With the glass empty we sprang from the table

Wishing what we did had just been a fable

Then, in unison, we all did exclaim:

“Good God I think I’m dying and the Triple Bock is to Blame!”

*Please do no try this at home. Really. 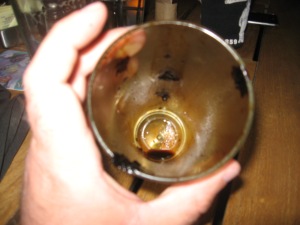