With two shows in the books in Portland, OR and Spokane, WA we took off from Spokane to our final destination of Calgary, AB. After 45 minutes or so of an uneventful flight where there was an evenflow of wind we began our decent into Seattle at which time our plane began to spin the black circle. It was a good ten minutes of terror where the forces of nature were pitted against our plane and I found my self realizing that I have no immortality and couldn’t stop muttering, “help, help” in a decidedly un-manly tone. With the runway approaching and our plane still swooping from one side to another I held on to the arm rest to my right and the arm rest in the row ahead of us just like you are taught to do when your plane is about to crash into the supple concrete below; all while holding my breathe. With a thud the plane touched down and one wheel came back up, causing my grip on the arm rests to tighten even more, then with all wheels on the ground we landed safely and all the passengers (at least those that hadn’t passed out) were instantly in a state of love and trust for the pilot.

Safely on the ground in Seattle, I must confess that I contemplated abandoning the tour and hopping a train back to Portland. I was excited to see one more Pearl Jam show and take my first trip out of the country to exotic Canada but I wasn’t sure I wanted to experience a take-off as eventful as our landing. Added to this anxiety was an impending snow storm in Calgary that was promising temperatures and snowfall that would rival that seen and felt in Antarctica (or at least that’s how my mind interpreted the forecast). Despite wanting to be in hiding I forced myself to get on the plane and only opened my eyes again once we touched down in Calgary.

Having safely made it to Calgary and stepping foot on to foreign ground for the first time I made it a point to pay particularly close attention to my surroundings so that I could share them in this blog. The first thing I noticed in Calgary was that there were people living there. People who looked like me, who spoke like me and who drove like me. There were some trees, buildings and (this came as a real shock to me) breathable air. It was really interesting even though it was nothing like I imagined.

Not everything was the same in Canada as in the United States however. For example, as we sat watching football on 10 different TV’s at a place called The Garage , I noticed that the Chicago Bears play even worse when you watch them in Canada. Additionally it seems that while the fried pickle craze was strong in Calgary as well, they have decided that they are best served on top of a hamburger rather than as an appetizer as I had in Spokane. 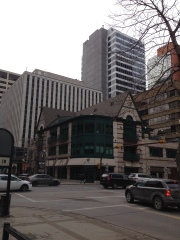 Before the, “Storm to End All Storms That I’ve Experienced in Calgary”.

Shell-shocked from the complexities of Canada, I had no choice but to make my way back to the hotel and sleep for most of the day and night in hopes that it would help my brain adjust to this new-found way of life. Unfortunately, while I was asleep it started snowing. It also got really cold. I tried to look upon the snow and cold with indifference as I bundled my self up and made my way outside in order to get a cup of coffee across the street, but the weather had other ideas as it began whipping me to and fro while leaving me breathless. You know the old joke, “How long does it take an American to cross the road in blizzard-like conditions in Calgary?” (A long damn time, eh! HaHaHaHa…eh!), well it was exactly like that. By the time I managed to get inside the building across the street I was gasping for air and had to have three toes and four and a half fingers amputated due to frostbite. Fortunately the coffee at Chiasso Coffee Company was really good and worth the walk across the street despite the wind 253 mph and the temperature no higher than -1992 degrees (without the windchill). Unfortunately, I then had to walk back across the street to get back to my hotel room. As I was doing just that I noticed (when my head was suddenly whipped up by the hurricane like winds of Calgary) that there was an enclosed walkway between the hotel and the building across the street. 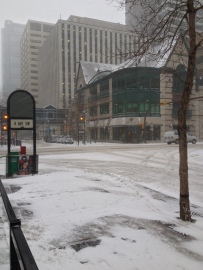 After the, “Storm to End All Storms That I’ve Experienced in Calgary”.

With the few hours remaining before the concert that night we went to the hotel restaurant, The Keg, for lunch and spent a delightful hour or so eating and watching the thrilling sport that is Curling on TV. For those of you who have never watched Curling I urge you to keep it that way. Not that Curling isn’t an exciting, fast-paced sport performed by men and women exuding athletic ability, it’s just that I had no idea what the point was. After researching the origins of Curling I discovered that it, in fact, never was invented which explains why it hasn’t gained more popularity outside of Canada. After eating lunch and listening to a couple of Canadians debate the finer points of the non-existent sport that is Curling my pal went up for a nap and I went looking for some local Calgary beer. Unfortunately the weather outside had worsened and the hotel had no enclosed walkways leading to any of the local brewpubs so I was limited to grabbing a beer at a faux Irish place that would make any Irish bar in Dublin envious of the fact that they didn’t have a bar like that this to laugh at in their neck of the woods. I managed to convince one of the three bartenders to get me a beer after he was done with the invisible customers at the bar around me and was pleasantly surprised when he complied. I was also pleasantly surprised that the beer was good, in contrast to the other beer offerings I had the day before. It was an IPA brewed in Canada but I was unable to get the name of it due to the fact that said bartender was working really hard on polishing the opposite side of the bar to me (the only customer at the bar). I did have one other beer of note after going back to The Keg, called Granville Island Winter Ale (brewed in Vancouver, BC) which had a nice chocolate flavor to it. I highly recommend trying this beer if you find yourself stuck in your hotel restaurant due to a raging blizzard when visiting Calgary.

Soon after enjoying the aforementioned winter ale, we made our way to The Palomino where the Pearl Jam 10 Club pre party was being held. The Palomino is a BBQ joint located in downtown Calgary next to their light rail and serves the same exquisitely bland beer that Canadians love to call their own. Being full from lunch still I wasn’t able to sample their cuisine but it sure smelled good. Securing tickets for the show from a couple that was smart enough to not want to deal with the weather that night, we hopped on the light rail and made our way to Scotiabank Saddledome. 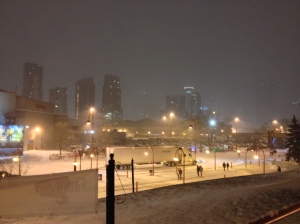 View from the Scotiabank Saddledome on that hauntingly frigid night in Calgary.

As I mentioned in the last post, Pearl Jam fans in general, and 10 Club fans in particular are an amazing close-knit bunch. As if to prove this to the pseudo-10 Club member that I am, I ended up standing next to a guy from Texas on the light rail, who just hours before, I was chatting with on the 10 Club member forum while looking for a ticket to the show. It just goes to show that it’s a small world, even when you are in Canada. 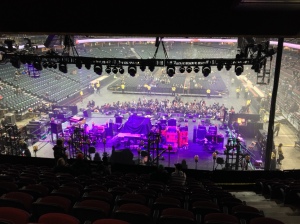 Pre-show view behind the stage. I considered jumping on the drums at this point but decided I didn’t want to stay in Calgary any longer (for the Bears sake).

The concert started the same as the other two, as Pearl Jam opened with Pendulum but then proceeded to play many of my favorites throughout the show including: Nothingman, I Am Mine, Elderly Woman Behind the Counter in a Small Town (classily played facing the crowd seated behind the stage) and Crazy Mary. The crowd, while sparser than the Portland and Spokane shows due to the weather, was rocking and it was great to see Eddie Vedder show some youthful enthusiasm as he climbed onto to a swinging globe light and swung himself out over the crowd. It was also nice to hear Vedder not only offer Seattle’s snowplows to help with the weather but also to play Rats after relaying to the crowd that he found it amazing that the arena looked as good as it did after the horrendous flood they had in May which filled the arena with water up to about the 14th row.

Pearl Jam put on yet another great show in Calgary playing for about three hours, and I enjoyed not only the show on this the last of my tour, but also enjoyed getting to know a couple of fun-loving Canadians who had braved the weather to be at the show (one drove from Edmonton that day in white-out conditions, eh).

After a mishap on the light rail and a chilly walk back to the hotel I knew my time on this trip had come to an end. With a couple of hours of sleep under my belt, I made my way to the airport and finally landed back in a balmy 43 degree Oregon that afternoon feeling both relieved and saddened.

It was nice to get home to see my wife and kids (especially considering the fact that I made it on time despite the weather in Calgary and Salt Lake ) but a part of me wished that I could have kept going with my friend as he continued on to Vancouver and, finally, Seattle. This was an adventure that I had never contemplated taking nor put on my bucket list, but in hindsight I should have. It wasn’t just the fact that Pearl Jam put on three amazing shows, though they did. It wasn’t just the fact that the Pearl Jam faithful were an amazingly fun bunch to be around, though they were. And it wasn’t just the fact that my pal was good company throughout, despite my sometimes subdued demeanor, though he was. It was a trip that showed me it is sometimes worth it to “just go for it”. It was a trip that showed me how much a large group of people (some the same, some different) can come together and become one in some sense of the phrase. It was a trip that showed me that fried pickles, however served, are not only great but should be served at most, if not all, meals. It was, indeed, a trip and I won’t soon forget.

*A full setlist and a more concise retelling of this concert can be found within the official Pearl Jam Ten Club forum, Given to Fly. 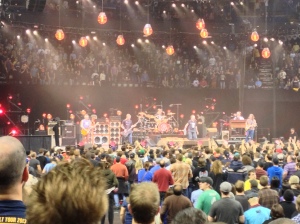 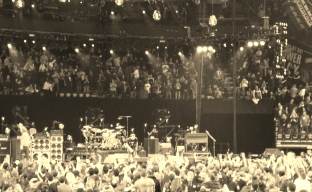 Eddie Vedder wishing me a safe journey home. I told him I wished he would drink better beer on the stage.