The day started off like most others: waking up, getting dressed, eating breakfast; all done in the usual break-neck speed in order to get everybody where they needed to go as close to on-time as possible. Despite the typical hustle and bustle, this day was in fact different. It was a special day. A day to remember. A day tinged with a bit of nervousness and a nib of excitement.

One of us was going somewhere new this morning.

A place that was unknown.

A place with mysterious routines and filled with even more mysterious people.

The time came and we set out, walking hand-in-hand, to this new place. As we walked we talked about the birds that we saw, came up with theories about what the mysterious chalk messages (an arrow seeming to point to the street, “You Rock!” in big-bold pink letters) on the side-walk meant, and discussing in generalities what the new place was going to be like.

Then we were there.

The building stood in front of us, imposing, yet, welcoming. People of various ages were going to and fro from the building. Cars, trucks and buses were driving in, unloading their passengers and then driving back out the way they came. We walked in, neither of us having a clue what to do or expect but knowing that we would figure it out together. After a short wait, during which we passed the time discussing toys and whether there would be any familiar faces here, we were led, along with many others, to a room in which many tables were set-up and surrounded by chairs; one for each person.

After settling in and flashing a nervous smile to a familiar face nearby, a brief introduction of the rules and routines were announced.

Then the time came.

The instruction was given to wave good-bye and blow a kiss to the parents.

I felt the tears well up in my eyes. A flutter in my stomach. A tremble in my limbs.

My hand rose, reluctantly, to wave. My lips smacked in a feeble attempt to blow a kiss. These were returned with more fervor than I managed.

Walking back home I couldn’t help but be proud of being the father of the brave, smart and handsome young man who I just had the privilege of taking to his first day of kindergarten. 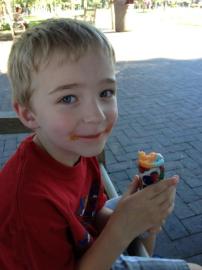 Enjoying a treat three-and-a-half hours later, after completing and proving his Unified Field Theory (how the great scientific minds failed to identify that Power Rangers, bald eagles and Teenage Mutant Ninja Turtles were the missing factors in this theory is a mystery).