I don’t tend to travel much (unless you count the many trips I take from the couch to the fridge) but this year I’ve had the pleasure of taking a few trips and wanted to share some of my observations, impressions and experiences of the places I’ve visited. I will try to include some travel tips that you may find useful should you decide to visit a place that I have been to and want to trust my suggestions over a respectable travel writer. Enjoy…

Population: 8,336,697 (this figure does not include cab drivers which are too difficult to count due to the high rates of speed they travel at and the incredibly distracting honking they tend to partake in)

Nickname: The City That Used To Never Sleep When It Could Get Whatever Sized Soda It Wanted But Now Goes To Sleep At Around 8:00 p.m. EST

After taking an overnight flight to New York City I was ready to start my two and a half day adventure. With much anticipation for my stay in NYC I did the one thing I knew I really wanted to in such a short amount of time: I fell asleep on my friend’s couch. It’s a very comfortable couch.

(Traveler’s Tip #1: If you are planning on visiting the NYC area I highly recommend sleeping on my friend’s couch. If they give you the option to upgrade to their air mattress by all means take them up on it!)

After a couple hours’ slumber I was greeted with the first, of what would prove to be many, amazing food experiences in the form of pastries and coffee from a nearby French pastry shop. After greedily attacking the pastries and downing the coffee we  set-off for the subway for my first look at the city.

(Traveler’s Tip #2: The subway is a terrific way to get around the city if you can 1) figure out where each line goes and 2) endure the jungle-like heat that has a way of bringing out the natural aromas of these subterranean oases.)

My first impression of the city, after emerging from the subway, was something akin to awe. Awe not due to the enormity of the buildings; though they were impressive. Awe not of to the sheer number of people walking, driving, skipping, running and riding; but there were throngs of them as far as the eye could see. My awe instead stemmed from the amount of honking that the cab drivers were doing. It was really impressive. No sooner would a light turn green (and sometimes even before it would turn green) approx 562,169 and 1/2 cab horns would sound in unison creating a sweet melody such as mine ears have never heard before.

(Traveler’s Tip #3: While it is possible to see the entirety of New York City in approximately 35 seconds by cab it is a good idea to consult with a doctor before you take a New York City cab to make sure that your heart, bladder and stomach are strong enough for such vigorous activity.)

As we meandered through various parts of Manhattan (Time Square, Little Italy, Chinatown, etc) I was amazed at how badly my feet already hurt. I was also impressed by the fact that I had only been bumped 22 times, pushed six times, cursed at twice and refused a cup of soup once. Actually the New Yorkers I encountered proved to be a pleasant bunch and have my respect for being the energetic and brave folks that they are. Their bravery has been well documented as evidenced by the way they have responded to such tragedies as 9/11 and Hurricane Sandy but what most people don’t see is the bravery that New Yorkers display several times a day when they are forced , for unknown reasons, to cross busy Manhattan streets against the light or, even worse, get into a cab. After witnessing these displays of bravery enacted thousands of times over in my short time there I can honestly say that I am scared to death for all of them (especially the people forced to take a cab somewhere).  During this time we had lunch at a place called (as far as I can remember) Mamoun’s Falafel where we had a great chicken kabob sandwich.

Di Fara Pizza – Motto: If Your Pie Isn’t Ready in 16 Hours or Less You Will Just Have to Wait Longer

After the kabob sandwich we went to Little Italy where I couldn’t resist buying some cannoli which were delicious and very much recommended if you can figure out which place I got them from. With cannoli in hand we headed to Brooklyn where we got an amazing pizza from Di Fara Pizza. What made this pizza exceptional was not the fact that the original owner still makes each pie by hand with only fresh ingredients (though it doesn’t hurt) but that they make you wait approximately 16 hours in a very small and stuffy area until you are just close enough to dying from starvation that when your pie finally comes out and you take that first magnificent bite you cannot help but believe that it was delivered from heaven by a pizza delivery car driving angel who insisted on a 20% tip on top of the $10 delivery charge. Very wise folks over there at Di Fara Pizza. Another wise group of food makers in the Brooklyn area are the folks at Nathan’s Famous which, of course, we went to immediately after finishing off our Di Fara pizza pie.

Nathan’s Famous located at Coney Island is famous for their hot dogs as well as their annual hot dog eating contest on the fourth of July wherein various men and women consume as many hot dogs and buns as they can in the allotted amount of time in order to obtain the title of Hot Dog eating champion of the world as well as having the honor of wearing the bright yellow mustard championship belt. It’s not the most pleasant thing to watch and yet, I look forward to it every year. While I didn’t eat anywhere near the record of 2,123,456 hot dogs that this year’s winner, Joey Chestnut, consumed in 5 seconds, I did enjoy one tasty dog. After taking a few hours’ break from eating while watching the Brooklyn Cyclones slug their way to a victory over the Vermont Lake Monsters, we then made our way to a sandwich shop called Cherry Valley Deli & Grill.

The sandwich I consumed at Cherry Valley (the TCS on a roll) was indescribably good despite the fact that it registered in as my 15th meal of the day. A chicken cutlet smothered in gravy on a soft yet tasty bun…

(Traveler’s Tip #4 & 5 – If you haven’t figure out why New York’s motto is latin for Alka Seltzer you have a much stronger stomach than mine. Also if you do have a chance to consume a Cherry Valley sandwich be prepared for your thoughts to drift into ellipses when describing the sandwi…) 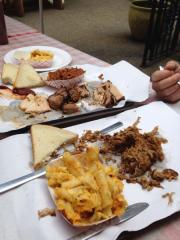 Day #2 started out the way Day #1 finished…food. Bagels, to be specific. It seems that New York is known for great bagels and that the secret to making such great bagels has something to do with the water. I found that to be an interesting fact but felt it was prudent not to ask what was in the New York water that made bagels taste so good. With bagel in belly we set off for some more food and beverage in the Brooklyn/Astoria area where we visited the Brooklyn Brewery, John Brown Smokehouse (amazing burnt ends, pork belly, mac & cheese, etc) and Beer Garden at Bohemian Hall. We then made our way back into the city where we spent the night eating, walking and consuming a beverage or two until we found ourselves at the one place I hoped to never find myself: a karaoke bar.

Up ot this point in my life I’d never sang at a karaoke bar before for a very good reason: I can’t sing. My singing is so bad, in fact, that I was once offered an A by my Junior High music teacher if I didn’t sing during class. At any rate I felt it was my duty to perform this great night in this great city because my friend would not stop harassing me until I did. So as I held the microphone and began belting out (or deperately mumbled in a monotone voice) the opening lines of “Weird” Al Yankovic’s Eat it, I knew that after these three and a half minutes were over, myself and the great city of New York would never be the same. My apologies to New York City (and “Weird” Al Yankovic).

(Traveler’s Tip #6: If you find yourself in a karaoke bar in New York City (or anywhere else for that matter) please turn around and leave. I promise it’ll be the best decision you make that night.)

My Seat on the Airplane

My 3rd and final day in New York was spent seeing more sites in the city (Central Park, Trinity Church, the firehouse that served as the Ghostbusters headquarters) and finished with a fine Italian lunch of Spaghetti alla Carbonara at Da Nico Ristorante along with not one, but two, plates of zeppole. With that I left the great city of New York feeling grateful that I was able to visit, if only for a short time, and a bit sad knowing that I would most likely be spending the greater part of the flight home in the bathroom due to the 128 meals that I consumed over the course of the last three days.

(Traveler’s Tip #7: It is advisable to request an aisle seat if you plan to consume the quantities of food that I consumed lest you irritate the other two people occupying your row who had just managed to fall asleep each time you frantically tapped them on the shoulder in order to get to the bathroom.)

In summation, I thoroughly enjoyed my time in New York City, which was made all the more enjoyable by the fact that my incredibly hospitable friends were there to show me the sights, teach me how to ride the subway, take me to some great restaurants and deli’s and explain to me the importance of using the bathroom before we left their apartment for an extended stay in the city.  If you haven’t been to the “Big Dutch Apple Pie”, as NYC is sometimes called, I highly recommend you do so. It is an amazing city with an equally amazing array of people, food, places, smells and car horns, all of which work in harmony to make the city the great place that it is. If you have been there before, I recommend going back and letting me know how much of an impact my karaoke performance has had on the city (I’d go back myself but I’m pretty  sure they would not allow it).