I blame it on Donald Trump. There could be no other explanation as to why I haven’t written anything for the last two months – my longest hiatus since I started writing this blog two years ago. It had to have been “The Don’s” fault.

How could you not joke about my hair?

I can’t think of any other reason for it.

At any rate, this post will serve to catch you up on my life over the last two months as well as being a platform to make jokes about Donald Trump. I apologize to my Mom in advance for what follows…

The last post I wrote was on Independence Day. I don’t recall what it was about but I’m sure it was funny. Either way, the theme of writing about independence was fitting for what followed over the next two months. After working for the same company for approximately 623 1/2 years I decided to declare my independence from them and work in general. I was tired. I was burnt out and, to be honest, I just didn’t want to work anymore. I had a severe case of the Mondays everyday. So I gave my notice, reveled in the fact that I was now officially retired and then promptly accepted another job when I realized that it’s even more exhausting to hide from bill collectors than it is to get a job and just pay them. I blame this on Donald “I’ve worn the same dead cat on my head for 30 years and you wonder why I smell this way?” Trump as well.

While my decision to leave a company that I had been with for a good amount of time wasn’t as difficult as dealing with the stench that is Donald Trump, it still wasn’t easy. I have some good friends there and I miss working with them. I can think of no better way to say farewell and thank you to them than to write a haiku:

It was fun I say!

I will miss you all of course

In between leaving and starting a new job, my wife and I had the pleasure of visiting the great city of New Orleans, or as the locals call it, “The City That, Despite it’s Horrific August Humidity, is Still Way Cooler Than Donald Trump”. It was a great trip and a nice way to celebrate our upcoming 15th anniversary. The highlights of the trip were as follows:

This is exactly how I remember Bourbon St looking

All in all, it was a great trip and one that we are sure to remember until next Tuesday.

With the vacation over, I officially parted ways with my last company, felt a terror that I hadn’t felt since hearing that George W. Bush was elected president again and started my new job. A month into my new job now I still feel a bit of terror that comes from walking into the unknown, but I’m happy to say that is has lessened nearly as much as Trump’s popularity has. 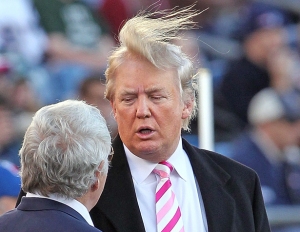 Uhh…My hair looks more like a dead bird than a cat don’t you think?

In the end, I’m happy that I took the risk to change jobs, was able to spend a week in New Orleans with my wife (sans kids) and that I’m writing again. While I have a lot to be happy about these days, the following haiku I wrote in honor of Donald “Really??” Trump has made me the happiest:

Does a silver spoon taste good?