With the appetizer course done it’s time to turn your attention to the focal point of your holiday dinner: what to drink next?

At this point in your holiday meal preparation it is necessary to drink something stronger as the recipes will only become more difficult here on out. I would suggest a nice moonshine if you happen to have some in your bathtub. At any rate, we are now going to turn our attention to the main course of you holiday meal. Traditionally the main course of a holiday meal is a turkey, ham or roast beast, but we are going to do something a little different; we’re going to make a soup. By breaking from tradition you will be assured of making an indelible impression on your guests for having the courage to break from tradition but you will also have utilized something that has, undoubtedly, been taking up space in your kitchen since Thanksgiving: the turkey carcass.

If you are anything like me you probably made a turkey for Thanksgiving and, after having carved the turkey, you have no idea what do with the rest of the poor bird. Before I was given this recipe I did the only thing I could think of doing with the carcass: put on a puppet show for the kids. It was a terrific idea but, like most things with kids, very unappreciated. While I’m told by their therapist that TCTD (Turkey Carcass Trauma Disorder) is curable it will be years, if not decades, before my sons are ready to do the same thing to their kids.

In the meantime I’ve gone with Plan B in dealing with the Thanksgiving turkey carcass: leave it on the carving board until a better idea than Plan B comes along. Before I was given the recipe that I will soon be presenting to you I had no fewer than six turkey carcasses stashed throughout my kitchen; each one at a different stage of mummification (one had even begun the work of building a pyramid around itself). Needless to say my wife was very excited to see that I now had a recipe that would utilize these turkey carcasses and allow her to step foot in the kitchen for the first time in six years. For my part, it was a bittersweet experience cooking these carcasses; I would have liked to have seen what the finished pyramid would have looked like (though I’m not sure the shade of green the carcass chose for the pyramid was the right choice).

Though the fuzzy green color for the pyramid may not have been the right choice, this recipe, from The Impatient Epicure , for a creamy turkey soup with long-grain rice is the right choice as the main course for your holiday meal. Enjoy! 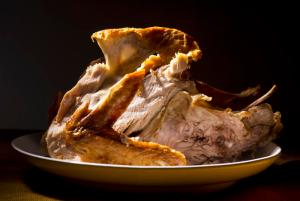 – Prepare the turkey carcass by scraping off as much of the fuzz-green pyramid as you can. It’s important to note that you don’t have to be too thorough on this step; the green color adds a festive tint to the soup. (Note: Depending on the age of the turkey carcass it may be prudent to wear your holiday Hazmat suit for this step – if you don’t have one they can be purchased at your local Bio Hazard store at a reasonable cost)

-In a large pot, pour chicken broth over the mostly de-fuzzed turkey carcass. If, like me, you have multiple turkey carcasses to use up it may be necessary to use multiple pots. If that is not a possibility you can, alternately, use your bath tub; just make sure that you clean and sanitize it beforehand (Note: if you also make moonshine in said tub you can skip the cleaning/sanitizing step). While it may seem odd to cook soup in our bath tub, it actually works well and has the added bonus of creating fewer dirty dishes to wash. Additionally, if you do have moonshine in the tub it will help melt the meat off the bones thereby extracting more of the juicy carcass flavors.

-Bring the broth to a rapid boil on the stove (or run really hot water into the tub); reduce heat (this will happen naturally if using the tub method), and add peppercorns, a dash of celery salt and any other leftovers you may still have from Thanksgiving dinner. Cover and simmer for as long it takes to congeal all of the leftovers with the turkey bits. To test whether the ingredients have sufficiently congealed you can tip your pot upside now. If nothing falls out you can move on to the next step. If anything escapes the post and falls to the ground, continue with the congealing process after you have scooped up whatever fell to the ground and placed it back into the pot.

-Once your ingredients pass the congealing test, remove the pot from the heat. At this point you will need a blow torch to melt the edges of the congealed mass from the pot. Having separated the mass from the pan you now have an opportunity to get your kids involved (if you don’t have kids see if you can borrow/rent one). The holidays are all about spending time with family and the kids will love to pull this gelatinous mess from the pan and, let’s be honest here, you don’t want to touch this stuff (Note: I found that not only letting my kids pull this “stuff” from the pot brought us closer but I also managed to separate a small ball-shaped chunk and the kids spent hours playing with this bouncy-ball like substance. If you should choose to do this as well please note that it is important that the kids have had all of their shots).

-In a large soup pot, or the other bath tub if you are following the bath tub method, melt the butter. Add onions, carrots and celery, and sauté until they officially have become part of the pot.

-Add the oregano, paprika, salt, pepper and garlic into the pot, and cook it until it becomes a permanent part of the post as well.

-Stir in the flour, and continue stirring until the flour has completely hardened into the butter and veggies.

-Pour in some chicken broth and bring to a boil until it all evaporates. 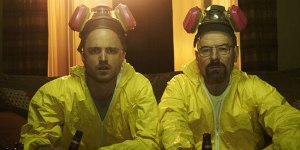 -Dump the remaining ingredients, the diced tomatoes, cream, rice and any other items from your refrigerator that you have been thinking about throwing away for months but never got a round to it, and cover the pot. The purpose of covering the pot at this point is to prevent having to smell whatever is happening the pot. After approximately 30 minutes (or a few days later), you will uncover the pot (your newly purchased hazmat suit will come in handy again here), take a big drink of your favorite festive beverage and admire the fact that your pot it completely ruined; or so it appears. While it may appear that the inside of your pot now contains a blackened substance that you will never be able to remove even if you attempted to do so with a jack hammer, the truth is that a jack hammer will, in fact, get the rest of your soup out of the pot, so make sure that you reserve one from your local culinary shop a few days prior to making this recipe.

-After removing the blackened mass of something from the pot, chisel pieces of it into individual serving bowls, top it with an equal amount of the Bouillon and a healthy pour of vodka (Note: the vodka helps break down the blackened mass and helps aid digestion as well as forgetfulness in your guests).

-As an aside, this soup can be served cold or warm. If you premade this soup several years ago you can, once again, make your kids scoop it out for you.

Give yourself a big pat on the back at this point; the worst is over and you have, so far, not only made an amazing “Cheeze Tower” and “Blackened-Bouillon Turkey Soup” but you have also proved to yourself that you are a good parent by getting your kids involved in the cooking process – just remember to keep your Hazmat suit on before you touch them.