Inside the Accountant’s Studio – David DeSantos

If you are anything like me you are wondering  why I would start a blog post with the words: “Facebook” and “Voidlord”. Let me know if you come up with anything.

In the meantime, it’s an honor and a privelage to present to you an interview with the talented actor, writer and, most importantly, Turbo Tax user, David DeSantos.

David, who has spent much time acting in Shakespearean theatre and has had an impressive array of roles in both film (When the Game Stands Tall, Alvin and the Chipmunks: The Road Chip) and televison (Ray Donovan, CSI, General Hospital), is currently wrapping up production of a short film called, Closure, a film in which he both wrote and acted.

Through a fortuitous combination of a Facebook post and a friend, I was fortunate enough to subject the voice of the Voidlord himself, Mr. David DeSantos, to interview questions that, no matter how hard he tries, he’ll never forget.

First off, I want to thank you for taking some time to do do this interview. Can you tell us about your new short film, Closure?

Closure was written a couple of years ago as a way of processing my fathers passing. It was an opportunity to rewrite the past or maybe rethink the future. In 10 minutes. It’s directed by Wallace Langham who you may know from CSI and The Larry Sanders Show, and stars Stephanie Beatriz from Brooklyn 99, Tim Bagley, Gareth Williams, and me. We had an incredible crew, which is still working tirelessly to bring this very special project to life.

We are in post-production now and will hopefully be able to show it after February. It will also be part of the national festival circuit starting then. People can go to www.themovieclosure.com which will be updated as the film, and it’s entry to festivals, progresses.

Is it possible for my readers to still support the project and, if so, how?

They absolutely can still support it! Every dollar we still raise ensures that we are able to get into more festivals! They can go to: https://www.indiegogo.com/projects/closure-a-short-film/contributions/new/#/contribute

The most important question I have to ask is: Are there any accountants in “Closure”? 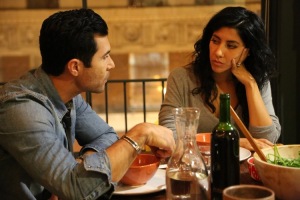 I wanted to hire an accountant to play my wife, because of their ability to problem solve, but I decided on Stephanie Beatriz who plays Rosa Diaz on Brooklyn 99.

Good choice! Besides playing the role of an accountant, what, if any, would be your dream role?

Well I’m still a man of the theatre, since most of my life has been on stage, and my favorite playwrights are Arthur Miller, Tennessee Williams, and Shakespeare. Thankfully in my years working at the Oregon Shakespeare festival I was able to play in these worlds. I start rehearsals for Cloud9 in Los Angeles in the new year and am excited for that.

One of my dreams has been to write a gangsta-rap musical (West Siiiide Story). How does that make you feel?

You seem gangsta, so I fully support you. I actually just saw Hamilton on Broadway, so you could follow Lin Manuel’s steps.

Speaking of being gangsta, besides myself, who inspires you?

Who inspires me? Well right now I’m baffled that someone like Lin Manuel Miranda exists. He is this generations Shakespeare and has created one of the most important pieces of theatre in Hamilton. It’s important and relevant and prescient. Every one of my social media followers (and friends, and coworkers) has been bombarded with my obsession with Hamilton. So now to the countless people reading this interview… please listen to it all, and see it. Oh and that guy Michael Fassbender.

As far as inspiration goes for me, I have, and continue to, draw inspiration from Simon the Chipmunk. In the new chipmunks film, Alvin and the Chipmunks: The Road Chip, which is in theatres now, you play the role of Vincente, and I’m curious, what is Alvin like in real life? I mean he’s always getting yelled at by Dave in the movies for doing wacky stuff but is that just his on-screen persona or is he essentially playing himself?

Alvin was so gentle. He’s the consummate professional. His craziness is all an act. He is very quiet and kind and supportive on set. You really have to be careful and watch Theodore though… he’s really a ladies man when the camera isn’t on.

In 44 words or less can you tell me, who, really, is David DeSantos?

Who am I? I’m still the 10 year old who was kinda overweight eating Chef Boyardee raviolis w/ saltine crackers watching a Gilbert and Sullivan video in my Grandparents house with an incredible imagination, wanting to play all the time, and make funny voices.

Since you mentioned funny voices, I read that you are the voice of Demon Void Lord in the video game, “World of Warcraft: Mists of Pandaria”, was this your only foray into the world of voicing characters in a video game?

I’ve been in 2 video games. World of Warcraft as a Demon Void Lord, and as Tap in Battlefield Hardline. In that one, I’m a drug dealer with a heart of gold. If my character had just studied harder during math class…

In regards to studying harder in math class, everyone has heard stories about how difficult it is to get into the film business in any capacity, do you ever look back and wish you would have chosen to be an accountant instead?

All I ever wanted to do as a kid was be an actor, and there are times when I look at my life and ask “what would my 10 year old self think right now”. It’s those times that I am unbelievably grateful. That being said, I’ve been using Turbo Tax the last couple years and doing my taxes myself. So, in a way, I’ve gotten the best out of both worlds.
While my two older sisters and mom aren’t as fond of Turbo Tax as I am, they all used to love watching soap operas, as an actor who has had roles in both “General Hospital” and “Days of our Lives” would you mind saying hello to them?

Hi Mom and Sisters… I got slapped in the face hard by Michelle Stafford.
Now, I’ve saved the hard-hitting questions for last…During the holiday season I watched a lot of Christmas specials, with my favorite being,“How the Grinch Stole Christmas”. With that said, what would you do  if you were a Who and discovered the Grinch stealing your Who-hash?

I’d probably ask him to do my taxes.
Along the same vein, have you ever noticed that the Grinch and Donald Trump have the same hairstyle?

They do. As well as Brendan Dassey’s defense attorney from Making A Murderer on Netflix.
I just wish I had hair. Out of curiosity, how long do you expect the regret to linger for having agreed to do this interview?

Ha Ha Ha, I love your sense of humor David!

Finally, I’m wondering if it would be possible to buy yourself and the chipmunks dinner sometime…