Slogan: Georgia’s First City to be Featured in Midnight in the Garden of Good and Evil

Nickname: The Midnight in the Garden of Good and Evil City of the South

Last month I had the pleasure of spending a few days in Savannah, Georgia for a very special occasion: October 9th, 10th and 11th. If you are wondering why these dates are special I highly suggest you Google them.

The single best seating option I’ve ever seen at an airport.

At any rate, after spending many hours flying to Houston, TX, I was then lucky enough to get on another airplane to fly into Savannah. As Savannah came into view during our decent I was struck by the fact that I couldn’t actually see the city; just a lot of trees. The surprise I felt about flying into a forest was only surpassed by the sight of thousands (or at least 10) rocking chairs lined up outside of the airport terminal. This was something I had not seen before but created an instant affinity for the south within me.After having an enjoyable sit on a rocking chair I was picked up by my pals and driven to the city of Savannah. During the car ride I was eagerly anticipating all of the southern hospitality that I heard so much about over the years; and I wasn’t disappointed! As we walked around the city that first day we were greeted by several complete strangers with a, “How do you do?”, though it was difficult to hear sometimes due to the fact that all Savannah drivers are apparently ex-cab drivers from New York who have not lost their affinity for honking their car horns. 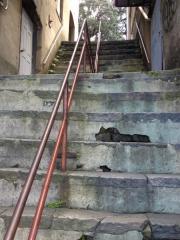 One of many set of stairs that we walked on in Savannah, leading us all to buy stock in a local titanium knee manufacturer.

Besides the drowned out pleasantries, the city itself was a pleasant place to walk around in. It was clean, it was pretty and it had extremely steep steps leading to the waterfront where one is required to sign a waiver in order to walk down due to the extreme likelihood that you will fall or at the very least require knee replacement surgery by the time you get to the bottom of said steps. Having made it down the steps and receiving my new titanium knee at the aptly named “Ye Olde Titanium Knee Shoppe”, I watched the rest of our party perform the inevitable ritual of “What Should We Do?” that folks are apt to do when in an unfamiliar place. After deciding to visit a historic house, we did so. For a spell, as they say in the south. It was a very informative tour at this particular house, however the excess of stairs after our adventures with the historic stairs proved too much for our new and, apparently, faux titanium knees forcing us to abandon the tour in order to experience something, anything really, else (though the discussion of the thread count in each piece of cloth in each of the seemingly 229 rooms in said historic chouse may have been a factor as well).
We rounded out the first day in Savannah with a nice BBQ and a mandatory viewing of Midnight in the Garden of Good and Evil which had the effect of putting most of us to sleep and, inexplicably, caused a couple of pals to have an impromptu footrace by one of the nearby squares (a park to my Yankee readers).
The next day dawned but I missed it by several hours as I recovered from many hours of missed sleep on my flight out. As I made my way up the stairs I discovered that I was staying with people who like to run. For fun. Not wanting to be mistaken for the lazy person that I am I promptly declared that I too was going for a run and then laughed hysterically. I did, however, set off on a leisurely walk where I had the good fortune of stumbling upon a Revolutionary War battlefield.

Marker at the Battle of Georgia battlegrounds

Having lived on the West coast my whole life I have seldom been able to visit historic places that date prior to 1972. In fact the closest I had come to seeing anything from the Revolutionary War was seeing John McCain campaigning for the presidency in 2008. At any rate, as I walked around the grounds of the Battle of Savannah I was mesmerized despite the fact that there wasn’t much to see. I’ve loved reading about the founding of our country so to be at a place where part of this fight occurred was an amazing thing. I spent hours there walking around the small area taking as many pictures as I could and soaking it up as much as possible.

View of the replica redoubt that the British defended against the French and American troops on 10/9/1779 during the Revolutionary war.

After an hour or so I walked away from the grounds I feeling fortunate to have been able to visit a place that was part of such a significant fight for freedom, however small this particular battle might have been to the overall war. I also felt fortunate to have stumbled upon one of Savannah’s oldest restaurants on the way back to the house. Not being able to resist I made my way to the bar and had a couple of local beers. The bartender was very pleasant at The Crystal Beer Parlor and made many great suggestions about things to do in Savannah, none of which I did.

The rest of the day was spent celebrating the special day that is October 10th. We had dinner at the Olde Pink House that explained to me all that needed to be told about why southerners are as pleasant as they are. The food was amazing (a pork tenderloin with a maple glaze, greens and grits comprised one of the best meals I’ve had the pleasure of eating), and the service was unbeatable. The night was then capped off with a trip to the Moon River Brewing Company where I had not only the pleasure of drinking solid southern beer but also watching my Chicago Bears beat the New York Giants.
My final day in the fair city of Savannah began with a quick walk through Forsyth Park (a.k.a. square) and a couple of great cups of coffee at The Sentient Bean where I ran into the bartender at the Crystal Beer Parlor who I had to awkwardly tell that I didn’t follow any of her suggestions on what to do in Savannah. We then went to The Pirates’ House, which is part of the oldest structure in Savannah, where I loaded up on pirate souvenirs for the family and enjoyed a pimento grilled cheese sandwich with a side of scurvy…Aaarggghhh! We then walked down to the waterfront to pickup a new pair of titanium knees, and enjoy the view of Savannah from the rooftop bar called Rocks on the Roof.

Though I left the pleasant and beautiful city of Savannah shortly thereafter my adventures were not over.

Landing in Chicago’s O’Hare airport I made it a point to soak up as much of Chicago as I could in the two-hour window that I had before my flight home. This would have been made easier had I not been distracted by the replica Brontosaurus located in Terminal B. I don’t want to give the impression that I’d never seen a replica dinosaur in an airport terminal before, I had, after all, seen John McCain at the airport once, but he was smaller and older and, perhaps, not a replica. Upon finally making it to my terminal I set off on an hourlong eating tour of Chicago as I gorged myself with a Chicago dog (good but messy – I’m still wiping the mustard off of my hands), a beer at Goose Island and a deep dish mini-pizza that I believe was only a replica of actual deep-dish Chicago pizza and made out of the same material as the Brontosaurus.

With an incredibly bloated feeling I boarded my plane home and silently apologized to those that would be sitting next to me on the 5 hour flight home.

John McCain at an Airport 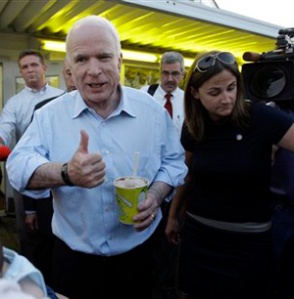 Brontosaurus replica in Terminal B at the Chicago O’Hare Airport