Home › Humor › The Fragility of Life

The Fragility of Life

Life is a fragile thing. We have all experienced the passing away of a beloved family member, pet or fantasy football season and understand that all things are temporary. However, for me at least, the fragility of life has never before hit home as much as it has over the last few weeks. During this unfortunate period of time I have been witness to innumerable near death experiences of others and, while each instance had a happy ending, the experience of seeing several normal human beings being brought to the brink has almost been too much for my aging constitution to take. Since I have always viewed this blog as my forum for cathartic release I am going to share with you all each of these experiences in very explicit detail. So if you are a senior citizen, a child under the age of 12 or a man or woman who is pregnant, or planning to become pregnant, reader discretion is advised…

As I mentioned before, these last several weeks have left me shaken as I have witnessed how easily a vibrant, strong and, mostly, young individual can be brought to the brink only to show that the fight for life is the strongest impulse all beings share. If you have been watching the World Cup soccer tournament you may have witnessed many of the same near-tragedies as I have, but for those who have not watched, I am honored to be able to share the stories of several young men who have overcome certain death to continue to fight for their team, country and soccer team, regardless of whether the perpetrator of their near demise was given a yellow card or not.

Speaking of yellow cards, I may in fact be given one for the affront to the young men, of whom I cannot remember their names nor their teams of whom this blog post is about. Regardless, I feel that the memories of their experiences can be expressed in generalities while still upholding their individual heroism. As an avid soccer player in my youthful days I have seen the carnage that is possible on the pitch and, therefore, am able to relate, perhaps, more than others how each soccer player is ready to lay down his/her life at the slightest touch. I learned at a young age that every time I put on my cleats and stepped onto the pitch that it may be the last thing that I do. In fact my fear of playing on the pitch became so intense that I could no longer play the sport of soccer (loosely translated as Futbol in every other country) or baseball for I was also afraid of being hit by a pitch. I believe that, to this, day my fear of any sort of pitch has resulted in my inability to say no to any and all salesman.

At any rate, for those who have not played soccer, it is impossible to describe the fear and, the attempt to overcome said fear, that each player battles through for each match. In soccer, unlike any other sport, it is nothing short of war.

Each touch from an opposing player is like stepping on a landmine and having three of your four (or five in some cases) limbs ripped from your body.

Each breath, no matter a wisp or an overt puff, that finds its mark from an opponent on the fragile body of a soccer warrior is enough to cause spasms of paroxysms such that said offended player may never recover.

Each look that threatens even the hint of being breathed upon or touched even in the slightest sense, can force these brave soccer warriors to fall to the ground writhing in pain.

For the uninformed it may appear that these brave soccer players are, in the popular parlance of today, “flopping”, but in reality these modern-day warriors are suffering more than anyone outside of he sport could imagine.

When a forward falls to the ground in agony they are not flopping; they are experiencing the pain of what could have been had they actually been touched by the opposition.

When a striker crumples at the thought of nearly being touched by the opposing team, it is not because they are flopping but because they know what damage their opponent’s jersey could do to their country’s home economy if they were to touch and, thereby, be accountable for the new Trumpian tariffs that have recently been imposed.

When a goalie repeatedly jumps the opposite way of the trajectory of the ball it is not because he wishes to be laughed at for being a truly horrid guesser, but because he has seen too many of his brethren fall in any given match and has decided to do what he can to ensure that they do not go into extra time or, heaven forbid, penalty kicks.

In other words, soccer players have to always be on guard of being utterly destroyed either physically or economically every time they step on the pitch and, therefore, have no choice but to roll on the ground in writhing pain every 16 1/2 seconds of the match.

As if the threat of physical and/or economical harm each soccer player in the World Cup has to face wasn’t enough, this year all of the player are also running the risk of becoming the next president of the United States, depending on the host country’s (Putin’s) whim. For those of you who are uniformed of the current United States political situation, this is currently an extremely undesirable position to be in and undoubtedly led to the US players throwing any and all chances that they had to make the World Cup tournament so that they would not be voted in as the next president by the Russian government.

Anyway, the point of this blog is that when you see a soccer player fall down writhing in pain for no apparent reason, remember that these people are just like you an I. They are human beings who have dreams and, on very rare occasions – usually when one looks away for the briefest of instances – goals, and would like nothing more than to live in a world where their lack of pain tolerance (and interest in presidencies) wasn’t viewed by millions around the world.

May they all find the peace they so very much deserve. 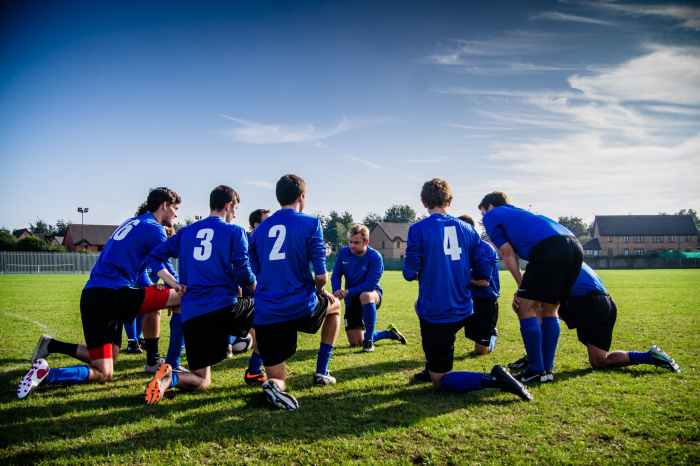 A Soccer Team Discussing Which Soccer Player May be Buried in the Grave of the Unknown Flopper. Photo by Pixabay on Pexels.com