Nickname: Mookie Blaylock and the Ballers 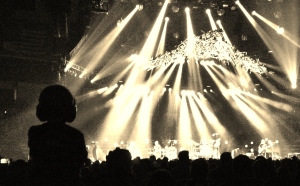 A few short hours after the Pearl Jam concert in Portland ended my friend and I began our journey in earnest as we awoke early the next morning to catch our flight to Spokane, WA.

The short flight to Spokane was pleasant enough and I spent a good portion of it talking to the gentleman next to me. After discussing the purposes of our trip -, his was to purchase a car for his daughter and mine, of course, to watch a second Pearl Jam concert in as many nights – we fell into an incredulous silence regarding each others reason for flying to Spokane. Drifting in and out of sleep during this silent period, a lightly snow dusted Spokane soon came into view as we began our descent.

Having never been to the city of Spokane I did some research in the weeks prior to our trip and discovered that it is a city
in the state of Washington. Additionally my research revealed that people live in Spokane and that there are, in fact, businesses. 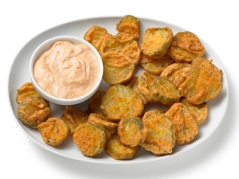 After checking into our hotel, we visited one such business called Post Street Ale House where we watched college football, chatted with those around us (many of whom were on their own Pearl Jam journeys) and had a few bites to eat, including fried pickles. Since I’m on the subject of fried pickles, it seems that this is the trendy food up north as I noticed it on several menus along our journey. With any luck this fresh and, I’m going to assume, healthy snack will work its way down to my neck of the woods. If not, I’ll have a reason to visit Spokane again, which is a city in the state of Washington I believe.

There wasn’t time for me to make it to a local brewery as I am wont to do when visiting new places but I did sample a couple of  local pints at the Post Street Ale House that provided me with the opportunity to write that beer is brewed in Spokane, which, again, is a city in the state of Washington (or thereabouts).

After watching the amazing finale (or seeing the replay in my case as I chose an inopportune time to leave the table)
of the Auburn vs Alabama game we took our leave and made our way to Spokane Arena for show number two.

Having never made a journey like this before I wasn’t exactly sure what to expect but one of the more interesting aspects to me
was seeing how devoted people are to Pearl Jam. I’ve listened to their music since their debut album Ten came out but didn’t really become a fan per-se until I met my wife, who is a big fan of the group. Despite owning all of their records, being an off-and-on member of their fan club and having gone to a couple of  their concerts, it became apparent early on in this journey  that I was a bushleaguer compared to these folks. It was impressive to listen to them talk about how Pearl Jam hadn’t played a certain song in ten years. It was impressive to hear them talk about how many shows they had been to (including a ten-year old boy who was travelling around with his father and was already closing in on double-digits for the number of times he had seen Pearl Jam in concert). It was impressive that some fans would offer to shave their ten-year old dreadlocks if the band would play a certain song (and even more impressive that Eddie Vedder took him up on it and shaved the guy’s head himself on stage while singing said song). It was impressive that after just a few short weeks I have had to review the notes that I took on the trip and read a few articles about the shows that I attended in order to remember what  happened where and what songs were played when.

Mookie Blaylock: A Favorite of all Grundge Rockers

At any rate, we soon met up with fellow Ten Club members who were gracious enough to pass on their spare tickets and entered the arena in anticipation of another great show. With a seat just behind the GA (General Admission) section, I was treated to another great performance from the band formerly known as Mookie Blaylock. Pearl Jam opened again with Pendulum and
continued with a set list that was my favorite of the three and included a great cover of Tom Petty’s classic Won’t Back Down.

One interesting aspect of the Spokane show, besides Eddie Vedder shaving a fan’s dreadlocks off midsong, was the number of children in attendance. I’m not sure if it was due to the fact that it had been 20 years since Pearl Jam performed in Spokane, or if babysitting is outlawed in The City That May or May Not be in the State of Washington, as Spokane is sometimes called, but there was a couple a few rows in front of me with two boys ranging in ages of between two and five and a young man in the GA  area who couldn’t have been older than eight, all of whom seemed to truly enjoy playing on their iPhones during the concert. Seeing these youngsters at the concert made me wonder if I should have tried to get a ticket for my oldest son for the Portland show as I think he too would have enjoyed playing on an iPhone during the concert. Actually, I found it pretty cool that these kids’ parents brought them to see such a great band and I applaud them for doing so. In addition to the kids and Eddie Vedder shaving a fan’s dreadlocks on stage, the band paid tribute to Steve Gleason, a former football player who is suffering from Lou Gehrig’s disease, who was in the crowd and, apparently, allowed him to help create the set list for the show. Like them or not, you have to give credit to the band for being classy and supporting people like Gleason and the West Memphis Three.

Pearl Jam playing their first show in Spokane in 20 years. Spokane is a city located in the state of Washington…probably

After around three hours of playing, Pearl Jam finished the show at around midnight and gave us a nice send off with a couple of Van Halen covers (Eruption and Aint Talkin’ ‘Bout Love) and one of my favorite Pearl Jam songs, Yellow Ledbetter.

My friend and I reunited after the concert and spent our final hours in Spokane doing what I imagine a lot of people do in
Spokane…sleeping. Waking up refreshed after about three hours of sleep, we made our way to the Spokane airport accompanied by the aforementioned 10 year-old and his dad as we were all given to fly to the frozen tundra of Calgary, AB. Going through the Spokane airport was uneventful (the last of the uneventful moments of this journey) and I was pleasantly surprised by the fact that they had rocking chairs at the gates even though it detracted somewhat from the uniqueness of the Savannah, GA airport. As we settled on to the plane for the short jaunt to Seattle and then to Calgary I couldn’t help but feel like a glorified G. That is until we began our descent into Seattle…

*A full setlist and a more concise retelling of this concert can be found within the official Pearl Jam Ten Club forum, Given to Fly. 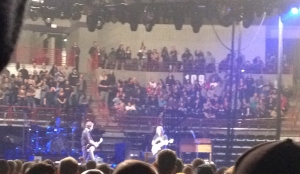